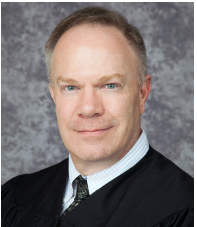 Allen Phillips hears cases in the Court of Workers’ Compensation Claims in Jackson and Memphis. A Jackson native, Judge Phillips attended Lambuth College where he graduated with honors in 1987. Judge Phillips graduated from the University of Tennessee College of Law in 1990. While in law school, he served on the editorial board of the Tennessee Law Review. Judge Phillips was one of the first eight judges appointed to the Court of Workers’ Compensation Claims in 2014. Before his appointment, he practiced law with Waldrop & Hall in Jackson for twenty-four years in the areas of insurance defense and general practice with a concentration in workers’ compensation. He was in active in the local Bar Association, serving on the Board of Directors and receiving the Liberty Bell Award in 1995 for outstanding service to the Bar. He is currently a Master of the Bench in the local American Inns of Court, a member of the National Association of Workers’ Compensation Judiciary and was a major contributor to “A Century of Progress and Prospective,” a book commemorating the Centennial of Workers’ Compensation in Tennessee.